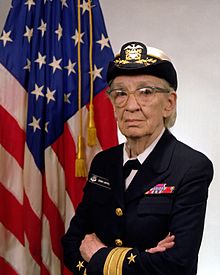 Thanks for the awesome doodle logo Google!  Anyone who does not know the scope to which Grace Hopper affected all of our lives, should read her wikipedia page.  Ending with the rank of Navy Rear Admiral, she coined the phrase “debugging” by getting a moth to be removed from one of the early computers (they liked the circuits apparently!).  She invented the compiler, and argued (to much resistance at time) that programs should use english language to be more expressive.  Any CompSci friends out there pining for writing in binary or hexadecimal still?  It was cool also to read in that article that she tried to influence the DOD to move away from large centralized systems and use smaller distributed systems.  Grace Hopper, we salute you and all your contributions to humanity!